First Ladies, like Michelle Obama and first lady candidates like Ann Romney during this election year in the USA, are pioneering new paths of influence in today’s society and many first ladies have used their position to change perceptions and raise awareness for lesser known causes. Hilary Clinton maximized her first lady role by creating awareness for her own capabilities, eventually running for President and now serving as Secretary of State. Country leaders like Chancellor Angela Merkel of Germany, President Cristina Fernandez de Kirchner of Argentina and Prime Minister Portia Simpson Miller of Jamiaca, elected by the people of their countries, are showing that female leadership is powerful and impactful in ways that might be different than male predecessors. We are currently living during a time with the most women ever serving in power simultaneously throughout the world. Forbes Magazine noted that 2012 is the year of the “Impact Woman” in their annual list of the 100 most powerful women in the world and showcases how these female leaders are inspiring the world around them, beyond their material successes.

Adding to that power throughout the world, that path of influence, that leadership and that impact are several “First Ladies” in the hospitality arena as this year is also a unique one in the history of the concierge profession. The hospitality industry’s ambassadors of service, Les Clefs d’Or, the professional association of hotel concierges, representing the top 3% of the concierge profession has their own First Ladies making an impact in their countries and around the world. 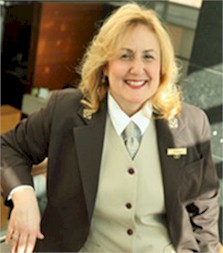 For only the second year in the organization’s 60 year history, a woman is leading this international organization, representing approximately 4000 leading concierges in almost 50 countries. Virginia Casale, President of the Union Internationale des Concierges d’Hôtels, UICH, also concierge at the Hôtel Sofitel Golden Mile in Montreal, Canada as well as the first Canadian ever elected is also pioneering new areas of impact and influence. When elected, Virginia dedicated her presidency to the ladies of Les Clefs d’Or, recognizing the need for more female leadership since only 17% of the organization are women. Of 43 country presidents, only three are women. On an Executive Board of 17 members, 10 officers and 7 zone directors, Virginia has been the only woman sitting board member since 2005. Now in her second year of her presidency, she believes more women need to step up and have the courage to aspire to and claim leadership roles.

Virginia also explained her vision for education through her platform as President. She is bringing awareness to the different tourism and hospitality institutes around the world which teach the concierge profession. She and her team are creating a new document which will showcase the different possibilities available to concierges and aspiring concierges around the world and create links between them. She is particularly proud of assisting four Canadian students from Montreal in getting hands on education in experience in Mumbai, India as they pursue their concierge careers, enhancing their international experience and guest service knowledge. This was all thanks to the Les Clefs d’Or network and this education effort. “The future is in this type of education which will form the great concierges of tomorrow, “says Virginia.

She notes that the Les Clefs d’Or keys open doors to even more guests, serving more than 126 million guests per year, based on the organization’s 4000 members and calculated on the number of rooms and percentage of occupancy, based on a single guest room. She also shared that statistics from an interactive questionnaire of active members showed that over 60% plan to remain in the profession for more than ten years. She feels this has huge significance in the hospitality industry where turnover is a challenge and shows true professional commitment to a profession that some have deemed questionable in this time of technology and new information tools. “We still know our guests better than any technology source and can relate to their emotions. We know how to create experiences that are memorable and exceed guest expectations,” claims Virginia. “Our international association and my presidency need to play our part in enhancing our good name and promoting our mission of ‘In Service through Friendship with our worldwide professional network and commitment to excellence.”

On a broader concept of women in the Hospitality industry, Virginia was invited to the HORECAVA tourism convention in January 2012 in Amsterdam, the biggest tourism event in the Benelux region. The theme this year was the SHE Economy, what SHE could do for tourism. “As you could see the woman’s role in leadership is being taken very seriously in our industry,” notes Virginia. “I was asked to participate because I am the second woman in 60 years to reach the President post. I wish to be an inspiration to Clefs d’Or ladies and other women interested in hospitality leadership around the world.” 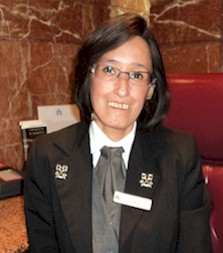 Diana notes that in Mexico, there are around 175 concierges in the country, 68 of whom are women but only 21 of them are Les Clefs d’Or members. “The Hospitality industry in Mexico used to be a world for men, fortunately nowadays it is different,” notes Diana, concierge at the Hyatt Regency Mexico City. “However the concierge world is still a department with more men than women if we consider doormen, bellmen and pages that often support the concierge role.” In Diana’s case, she shares the desk with 5 concierge colleagues, all of them men. She also works with 4 doormen and 13 bellmen which means a department of 23 persons where she is the only woman.

“When working only with men, it is maybe necessary to be very strong but also completely human, very demanding but also concerned about all of them, formal and professional without forgetting femininity,” Diana continues. She believes that the most important strengths are self –confidence, conviction and certainty but that each aspiring leader must continue learning and demonstrating that there is no professional difference between men and women. Diana sees opportunities growing and developing for woman as Room Directors, Hotel Managers and General Managers in addition to Chef Concierge, the top concierge role.

Jeanne Mills is President of Les Clefs d’Or USA, the largest country member of Les Clefs d’Or, with over 600 members. “We bring additional insight and relatability to our female guests, working mothers, professional women and families, notes Jeanne who is also Chef Concierge of the MGM Grand in Las Vegas, considered the largest concierge department in the world. ” We understand the multi-tasking challenges of women in today’s society as we are intense multi-taskers ourselves and offer knowing empathy to both our female and male guests and colleagues.”

Jeanne notes that numbers for Les Clefs d’Or Members in the USA are a bit more balanced and is almost 50/50 yet many more opportunities exist for leadership. She adds that women are natural leaders in that they are masters at encouraging people and bringing out the best in them. “We are artists of work and life balance. We are leaders in our households, in the Parent Teacher Associations (PTA) and within our communities. Although we continue to see more women in the workplace and many more women leaders climbing to executive ranks in major corporations in all professions; we have yet to break the glass ceiling. The numbers are still not anywhere close to being balanced in a variety of hospitality leadership roles and so we continue to make strides forward.”

In Japan, the trend is up for women concierges. The Les Clefs d’Or Japan have 23 members; 16 women and 7 men concierges in Japan. 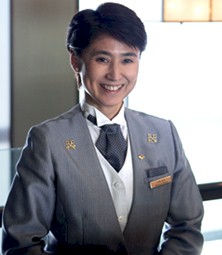 Masumi Tajima, Chief Concierge of the Mandarin Oriental Hotel in Tokyo, Japan and President of Les Clefs d’Or Japan expresses, “Since 10 years “Omotenashi” (hospitality) has gained attention from all over the world, and at the same time a variety of industries and occupations are developing concierge services based on the foundation of hotel concierges. I continue to strive to provide service that not only satisfies but moves guests with the utilization of our strong local, domestic and international networks.” Through her leadership, she is also placing efforts in the development of junior staff in Japan. “I will continue to strive to make our profession known by more people, to better our work, and to contribute to the concierge profession and be able to stand shoulder to shoulder with concierges with a longer history in many countries like Europe and the USA.

Other concierges pioneering new types of leadership and “firsts” in their roles include concierges like Adrian Robbins of the Loews Don Cesar Hotel, on St. Petersburg Beach in Florida. Adrian, a former Les Clefs d’Or Concierge and the Intimate Event Coordinator for the Don, handles weddings and events for her property. In addition to the many functions and duties she has as a concierge and all the details which need to be handled for any wedding such as flowers, invitations, meals, music and more…..she also administers the rites of marriage as an ordained minister and notary public. “I enjoy helping people begin a new life together, “states Adrian. “It is an amazing feeling to be around people who are truly in love and be part of them starting their new life together.” Adrian also serves as President of the Bay Area Concierge Association, again showing initiative in being a role model, an active concierge and a leader in new areas for her profession.

Previous concierge leaders that helped pave the way for these women, made history and provided their own “Firsts” in the concierge profession include Holly Stiel, author of the Ultimate Concierge Training Manual and noted hotel consultant and motivational speaker. In 1976, Ms. Stiel became the first female concierge in the country when she created the desk at the Grand Hyatt Union Square in San Francisco. Two years later she was the first American woman to be admitted to the International Les Clefs d’Or Association for concierges. Her newly released textbook, The Art and Science of the Hotel Concierge helps current and aspiring concierges learn the essential skills to begin and progress in this prestigious profession and is the first known book to chronicle the many facets of being a professional concierge.

Marjorie Silverman a concierge for over 25 years, including Chef Concierge of Hotel InterContinental Chicago was the first female and first American to serve as President of Union Internationale des Concierges d’Hôtels, prior to Virginia. She now serves the international Les Clefs d’Or as an Honorary President, member of Le Conseil des Sages, whose function is to advise and safeguard the statutes and ideals of the Association. Les Clefs d’Or USA honored Ms. Silverman, now a meeting planner and lecturer with a Lifetime Achievement Award and has dedicated a scholarship in her name, The Marjorie Silverman Education Fund. “In my role, I had the opportunity to transcend global politics and join forces to promote tourism worldwide,” notes Marjorie.

All of these women, these First Ladies, recognized that they must step forward and motivate others, especially in an increasingly technological world and to reinforce the many ways in which the human touch can make a difference. Through each of their leadership roles, through each of their platforms, they are creating new opportunities and serving as role models for other women in concierge leadership and in hospitality. Virginia, Diana, Jeanne, Masumi and Adrian believe women just have to step forward, have the courage to run for office and to take on new leadership roles as concierges and within their hotel properties. “They will be welcomed because we need desperately their input as leaders in our industry,” states Virginia. More and more of our women guests and employees are the decision takers as well as makers in the hospitality and travel industry. Therefore we need to see more women leading these fields.”
“We embrace the grace and savoir faire of the past, we add our own touch of charm and warmth for our guests and colleagues and we recognize we can use all of this as hospitality leaders and role models of service excellence through our leadership…and as women,” adds Virginia. After all, they are… ‘Ladies First’.